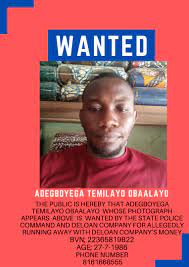 A customer of Deloan lending app has cried out to the public accusing the platform of labelling him a criminal and fraudster for a loan he never collected, asserting the platform never disbursed any cash loan to him.

There was this particular loan app, called Deloan that came to my DM to ask me to collect a loan from their platform. I then decided to try them. I downloaded the Deloan app and my first loan was N10,000, I checked the app very well to know what I’ll pay back but in the app did not put the interest so I believed maybe the N10,000 has no interest. It was for 7 days tenure. I attempted to confirm the loan but it was declined, that they cannot pay me now that I’m not well verified.

Later I decided to open the app, maybe I’ve been qualified to get money from them again and as I did, the Deloan app kept telling me one day remaining to pay back my loan…I was like which loan that they didn’t send any loan to my account, no account message that they sent loan to me …I checked my application, no money is there, I checked everything there’s no sms.

However the deloan app indicated they’ve given me loan that in 7 days I’ll pay back. The next day, they were now telling me that my loan is due yesterday and that I should try and pay my loan before 12:30pm and they were sending me lots of messages..

They’re just telling me to come and pay money that I didn’t collect from them…Before I knew it, it was one of my pastors that now messaged me on whatsap that he got this kind of message and I’ll show the details of the message they sent to him because he took a screenshot of it..

He even blast them saying that the Obalayo that he knows isn’t a fraud, a thief , he’s not what ever they called me ..If he had borrowed money from you and he didn’t pay back that doesn’t mean he’s a thief or something that he’ll surely pay back and he’s not what they framed me to be and they began to insult my pastor, they started cursing him and all..

See some of the messages below they sent to me and my contacts.

SORRY TO BOTHER YOU BUT Adegboyega Temilayo Obaalayo WITH PHONE NUMBER 8161668555 IS A THIEF, FRAUD, LIAR AND A CRIMINAL

Adegboyega Temilayo Obaalayo TOOK A LOAN FROM US AND HAS REFUSED TO MAKE PAYMENT ON HIS LOAN. HE IS ACTING FRAUDULENT AND IS NOT TO BE TRUSTED. PLEASE BEWARE!!

The victim’s pastor replied thus below:

YOU ARE THE CRIMINAL FOR TELLING LIES ABOUT HIM. HE IS NOT WHAT YOU WROTE ABOUT HIM. HE ONLY BORROWED MONEY WHICH HE YET TO REPAY. ASSASSINATING HIS CHARACTER TO THIS SHOWS YOU ARE MORE CRIMINAL WHO CAN DO OR SWEAR TO ANYTHING TO Collect A DEBT. HABA YOU’RE THE WORST CRIMINAL OOOOOOO.

Deloan, which claims to be operating from 169, Karimu Kotun, Victoria Island, according to findings is not present on either the Google playstore or app store, rather the operator advertises it’s “cheap loan” products online and links are promptly sent to unsuspecting victims to download, sign the contract for a 7-day tenor loan or more as the case may be.

Albert Onisolou Cherish, 24, a resident of Bayelsa State is one of the latest victims of these loan sharks. While the noise of FCCPC joint Taskforce is yet to abate, Deloan is having a field day fleecing unsuspecting customers and threatening its victims.

Cherish who has taken loans of N10,000 more on than three occasions and paid back, as of Friday 17th March, had a loan of N23,000 which falls due last Friday.

While Cherish was gearing up to repay the loan, she said at about mid-day she was bombarded with a barrage of calls and messages from her contacts sympathizing with her on her “current HIV/AIDs health status”. She later found out that these stemmed from the messages populated to her contact by Deloan. “This was done the very day I was to repay that loan”.

The ill-fated messages (broadcast) to her contacts were possible because the customer signed away some privacy in the small print document she was made to append her signature before she could access the loan. Deloan also accused Cherish of “robbery and fraudulent”.

According to her, “The loan was for 7 days. I’m not denying the fact the company lend me money to be paid back. I have not failed in paying back, the given hours hasn’t reached they started messaging my contacts and to the extent of calling me HIV and AIDS positive which is the reason I told them am not paying for assaulting me and stigmatizing me with such a dangerous ailment”.

Cherish condition for repayment is simple. She insists that having “done their worst”, Deloan Company should either prove to the public that she actually has the disease or apologise to her before she will pay the outstanding loan.