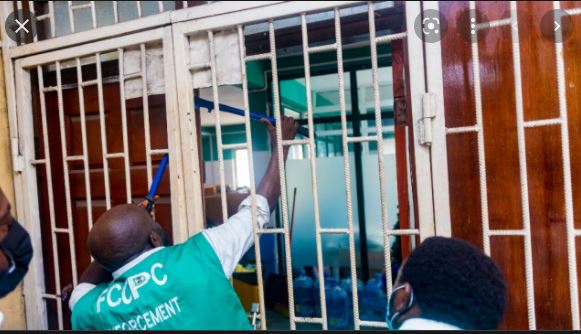 Some illegal loan apps inflicting pains on borrowers and sending threat messages to their contact list  In Nigeria have finally been banned over serial violation of customers’ data privacy. We advise users to only patronize trusted and reputable online loan companies.

Many Illegal Loan Apps Banned in Nigeria and Operations Shut Down

Nigerian authorities has finally risen up to the challenges and threats posed by illegal loan apps and loan sharks operating in the country by banning the operations of many of them. These include those that have constituted themselves into a menace, violating the data privacy of their customers and consistently sending shame and defamatory messages to the borrowers, their family members and their phone contacts.

The Federal Government raided the offices of  illegal digital lenders located in the capital city, Lagos metropolis some months back and shut down their offices and consequently their operations over alleged consumer rights abuse. Many of the loan apps banned in Nigeria are operating illegally without license from the CBN or registered with the Corporate Affairs Commission (CAC).

The raid was led by the Federal Competition Consumer Protection Commission (FCCPC) in conjunction with the
Independent Corrupt Practices and Other Related Offences Commission (ICPC), the National Information Technology Development Agency(NITDA) and the Nigeria Police Force (NPF).

These illegal apps have either had their operations shut down in Nigeria or outrightly had their apps banned and removed from both Google Play Store and Apple Store. Some however that have been banned nationwide are still hiding under Play Store and secretly swindling and scamming unsuspecting Nigerians.

The affected top 14 loan apps banned in Nigeria are included in the list below.

We strongly warn every Nigerian to desist from doing any business or borrowing money from any loan app that appears on the list above. They are illegal, they are scammers, the loan apps are fraudulent and allegedly in consistent customer data privacy violation.

Mr Dave Fadiya, a security consultant says: “Sokoloan is the parent company of  GoCash, they don’t give second chance they’re the worst loan house I have ever heard. The bottom line is they threaten their staffs to sack them sometimes they don’t pay they their salaries, that’s what one of their staff who is close to a friend to him. The Chinese dont care.” It is generally believed that Sokoloan lending app and parent company is also the owner of GoCash, both of them among the loan apps banned in Nigeria.

Another customer spoke with QUICK LOAN ARENA about this threatening loan app: “I borrowed N8000 from GoCash to pay back N12,100 in 7 days and I have paid N7000 remaining N5,100 to balance. I have been sent serial shaming and threatening messages.

Top 10 Apps That Give Urgent Loan In Nigeria Without Documentation

“As part of the operation, the JRETF together with the Nigeria Police Force and bailiff of the Federal High Court searched locations of the money lenders, extracted valuable evidence and in some circumstances prohibited or restricted continuing operations.

“In addition to the physical operation noted above, the Commission entered and served Orders on multiple financial institutions freezing or suspending operations of certain accounts which some of the money lenders have used to conduct implicated business or transactions subject of investigation.

“Further, the Commission also entered and served wide-ranging orders on Google LLC (Play Store) and Apple Inc. (App Store) to enforce the withdrawal of certain applications where evidence has established inappropriate conduct or use of the application in violation of the rights of consumers.

“The Order of the Commission also prohibits acceptance and presentation of new applications for the same purpose without regulatory assessment and approval.

“In the interim, the Commission admonishes all the businesses that were subject of regulatory intervention on Friday, March 11, 2022, to cease and desist the interest compounding and loan repayment/collection practices that are the objects of this investigation.

“In the event that any of these businesses continue in any of this conduct, or the Commission receives credible evidence of such, violators will be subjected to the full extent of the law including prosecution without option of administrative regulatory resolution.

“The Orders of the Commission are without prejudice to existing borrowers repaying any legitimate loans pursuant to fair and acceptable terms and conditions; or any modifications to previous terms and conditions that are considered onerous, inconsistent with prevailing law or general principles of transparency and fairness.

The agency also banned the acceptance and presentation of new online banking and loan applications without regulatory assessment and approval.

The decision to ban these illegal loan apps was contained in a statement by Executive Vice Chairman/Chief Executive Officer of the FCCPC, Babatunde Irukera, for the Joint Regulatory and Enforcement Task Force.

He said the order is in furtherance of the action taken by the Inter-Agency Joint Regulatory and Enforcement Task Force last Friday, which led to the shutdown of some online banks.

The statement read, “In furtherance, and pursuant to an Order of the Federal High Court procured by and granted to the FCCPC, the JRETF executed a search and seizure Order on certain digital money lenders.

How To Identify these Fraudulent Loan Apps Banned In Nigeria

“They are not Nigerian companies, they don’t have an address in Nigeria and they are not registered in Nigeria with the Corporate Affairs Commission and they do not have any licence to do their business.”

Highlighting steps taken by the commission, Irukare said the FCCPC obtained a court warrant to proceed with a “search and seizure”.

He said the commission had written to global app companies, asking them to shut down the loan companies’ apps.