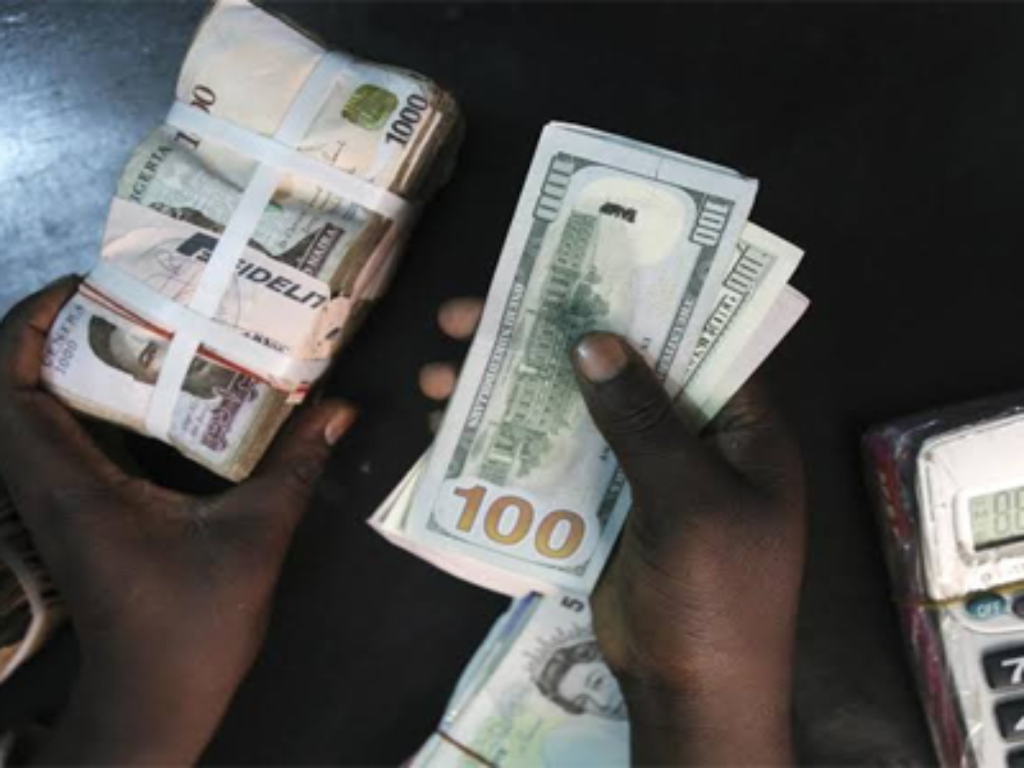 The exchange rate between the naira and the US dollar has fallen to a record low at N685.5/$1 at the peer-to-peer (P2P) forex market, findings by Nairametrics from cryptocurrency P2P exchange market shows.

The dollar to Naira today which was traded at N667/$1 yesterday has now fallen further by 2.8% to N685.5/$1, as demand for foreign exchange remains elevated amidst sustained scarcity.

The P2P market often traded in small volumes and the unit of exchange is the cryptocurrency USDT, which is a stablecoin that trades 1:1 with the dollar.

Meanwhile, in a conversation with a BDC operator at the Lagos International Airport, he stated that he sells dollars for N675/$1, while he buys from customers at the rate of N665/$1, indicating a N10 margin on every dollar.

Exchange rate for “inflows”, a term for dollar transfers from a foreign country into Nigeria or in another account in exchange for naira locally ranges from between N665-680 from some of the checks we conducted.

While the exchange rate is experiencing huge volatility and disparity at the unofficial markets, the Investors and Exporters window, where forex is traded official has also seen some level of a downtrend in recent weeks, albeit controlled.

Notably, the naira fell to N431/$1 at the I&E window on Tuesday’s trading session, the lowest rate recorded since the beginning of the year. This is following the recent decline in the volume of FX available in the market. On Tuesday, only about $58.03 million in FX value exchanged hands, representing a 35% decline compared to $89.8 million that was traded the previous day.

Some BDC operators have blamed the volatility in the parallel market on the fragmented and disorganized state of the market. Some have also blamed it only significant rise in demand as a result of panic buying.

Meanwhile, some P2P exchange markets traded at lower rates this morning. For example, on Trove, the exchange rate was stated at N665 to a dollar, while Bamboo was N655/$1. It is also worth noting that N685.5/$ is the lowest rate stated on Binance.

According to Investigations by QUICK LOAN ARENA, the Nigerian Naira continues to suffer terrible plunge with respect to the United States Dollar as the Dollar to Naira today exchange rate stands at N685/$1.

Dollar to Naira today at the Black Market today, otherwise called parallel market plunged to N667/$1 compared to N658/$1 recorded in the previous trading session. This is according to informatio

1. How Much Is Dollar To Naira Today

Dollar to Naira Black Market, otherwise called parallel market, exchange rate on Friday, the last trading session, crashed to N667/$1 compared to N658/$1 recorded in the previous trading session. This is according to information from Bureau De Change operators.

Nigerian naira, on Tuesday, fell at the parallel market to N667 per dollar amid higher dollar demand.

With the further scarcity of forex in the market, the exchange rate at the peer-to-peer market depreciated significantly to a record low of N667/$1 in the early hours of Tuesday, representing a 1.72% decline compared to N655.73/$1 recorded on Monday morning. This is the highest rate recorded in the unofficial market.

The exchange rate between the naira and the US dollar closed at N427.17/$1 at the Investors and Exporters (I&E) window, where forex is traded officially.

Meanwhile, Nigeria’s external reserves recorded its fourth consecutive decline on Friday, dropping by 0.05% to stand at $39.39 billion from $39.41 billion recorded as of Thursday, 21st July 2022. The decline in the country’s external reserve could be attributed to the increased flow of FX in the official market in the past two days.

The CBN had explained during the last MPC session that Nigeria’s external reserve grew in the month of June 2022 as a result of increased non-oil export and improvement in diaspora remittances through its RT200 and Naira4dollar programmes respectively.

The Naira-US dollar exchange rate at the official Investors and Exporters (I&E) market has remained largely stable around the N420/$1 region. On the other hand, the Naira is heading toward N650/$1 on the black market, which has continued its downward trajectory.

QUICK LOAN ARENA recalls earlier, that to defend the naira, the Central Bank of Nigeria (CBN) has introduced some regulations, from barring the sale of dollars to BDCs to the RT200 scheme, which is designed to provide an N65 rebate on export revenues.

Nonetheless, the CBN intervention, the dollar to Naira is still at an exorbitantly high rate.