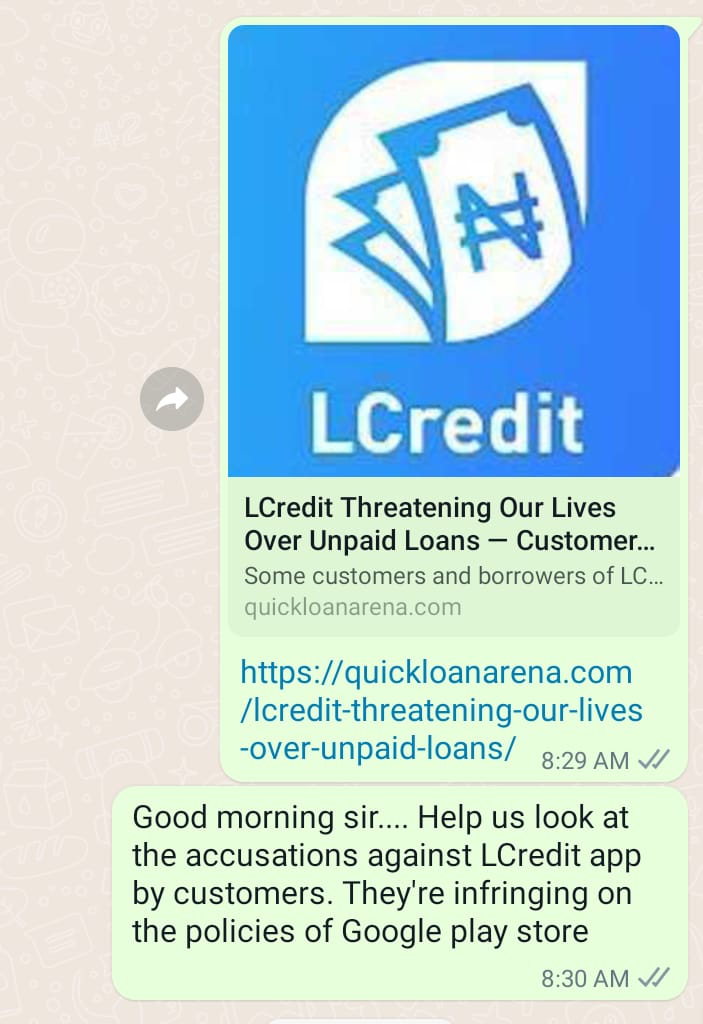 Multiple violating loan app in Nigeria, LCredit has been finally shown the way out of Google Play Store after QUICK LOAN ARENA damning report on the serial abuses, loan application and tenure violation and abuse of customer data privacy and other several infringements recorded against the lending platform.

LCredit is the of worst lending platforms to ever exist in Nigeria judging from the way and manner it has been conducting its activities, nothing could be more unethical and uncouth in the serial abuses and invasion of privacy that LCredit has subjected its various customers to.

QUICK LOAN ARENA had exclusively reported in October last year that the internet giant, Google removed Rapid Naira and LCredit loan apps from its Play Store after found to be serially violating its policies on loan application, approval and loan tenure, terms and conditions, and privacy polices guiding finance apps hosted on its network.

This medium has been on the forefront reporting against scam apps such as LCredits, Rapid Naira  ForNaira and some others on Google Play Store predating on poor Nigerians and violating Google Policies on lending apps.

According to one of the policy statements of Google for loan apps hosted on its Play Store: “We only allow personal loan apps with full repayment required in greater than or equal to 60 days from the date the loan is issued… apps that fail to do so will be removed without further notice.”

However many of the lending apps, including LCredit and many other loan apps in Nigeria give loan ranging from 7 days to 30 days at very exhorbitant interest rate and APR higher than that specified by Google. The network should enforce its policies and show these violating apps the way out.

What Happened To LCredit Lending App? Why Was It Banned From Google Play Store?

LCredit was removed from Google Play Store by Play Protect, an Android security system that scans apps hosted on Google for malware and other malicious virus and fraudulent apps and protects users from privacy infringement and invasion. LCredit is a serial loan app offender that is in the habit of accessing borrowers’ data, exposing them to the public and blackmailing them.

Google had warned users from using LCredit app because it was trying to spy on phone contacts, recordings, photos, banking details and other sensitive contents on their devices. This is against Google Privacy Policy.

LCredit Was Later Reinstated And Allowed Back Into Google Play Store

QUICK LOAN ARENA had exclusively reported in Novermber that Google has restored and readmitted the rogue app, LCredit into its Play Store exactly one month after the initial ban. The internet giant has removed LCredit and Rapid Naira from the Store on the 21st of October, for data breach and violation of customers’ data privacy.

We quickly reported the life threatening story made by LCredit against some customers and also made a formal report to Google Inc through their Nigerian representative asking for the internet giant to take action against the scam loan app and remove it from its play store.

Fortunately this time around, Google responded to our story and the threats by LCredit against Nigerians and booted the scam loan app from its playstore. With this ban, Nigerians can finally have some good rest and patronize only reputable loan apps in Nigeria for loans.